Over 41 percent of California’s irrigated farmland will lose 80 percent or more of its normal surface water allocation this year, according to a new survey by the California Farm Water Coalition.

The survey of agricultural water suppliers conducted the first week of April shows that 3.1 million acres, or 41.6 percent of California’s irrigated farmland, is expecting deep cuts to the water delivered in a normal year. That is an area 10 times the size of Los Angeles. 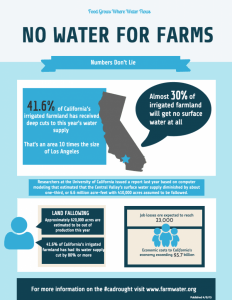 The survey also revealed that almost 30 percent of the irrigated farmland in the state, 2.2 million acres, will get no surface water deliveries this year.

Because of significant agricultural water supply cuts that have happened over the past two years, large amounts of land going unplanted will occur in 2015. According to the survey, approximately 620,000 acres are estimated to be fallowed this year. Associated job losses could reach 23,000 with an economic hit to the state’s economy exceeding $5.7 billion.

California farms have taken a severe hit to water supplies for two years in a row. Researchers at the University of California issued a report last year based on computer modeling that estimated the Central Valley’s surface water supply diminished by about one-third, or 6.6 million acre-feet with 410,000 acres estimated to be fallowed.