It takes water to grow food

It takes water to grow food 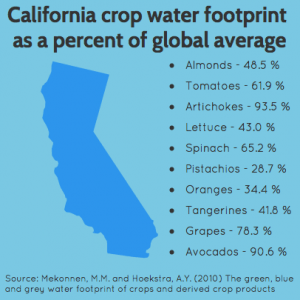 Are we really using too much water to grow food in California? The simple fact is that it takes water to grow food no matter where in the world you till the soil. Critics claim that the consumption of California farm products is somehow contributing to the drought. That is an unwise assertion and here’s why.

California produces about half of the nation’s fresh fruits, nuts and vegetables and does it more efficiently and responsibly. They’re the kinds of foods that nutritionists say we should be eating as part of a healthy lifestyle. Consumers want choices and California’s 400 different commodities gives them exactly that. California also produces food products more efficiently than anywhere else in the U.S. and more specifically the world. California is one of only five Mediterranean climates on earth and the only one in the United States. Growing what we grow here simply isn’t possible in most other places.

California is the natural place to grow food

Finding other states to replace California farm production isn’t practical and importing more of our food supply from other countries has its own share of risks and problems. California already imports twice as much “virtual water” in the products consumed here than is exported in the things we produce. Increasing the amount of food imported from other countries contributes to this imbalance.

California is the efficient place to grow food

What we should focus on is growing food in places where it can be produced as efficiently as possible. Artichokes, lettuce, spinach and many other vegetables are produced year-round thanks to seasonal differences from the Imperial and Coachella valleys in the south through the San Joaquin and Salinas valleys northward. The Sacramento Valley grows all of the sushi rice produced in the U.S. An amazing 85 percent of the U.S.-produced fresh citrus comes from California. Tree fruits and nuts that require cold winters and hot summers grow better in California than anywhere else as well. It simply makes more sense to grow food where it can be produced efficiently and transport it to consumers where they live. The alternative is to struggle to grow food on the wrong soils or in the wrong climate where production efficiencies are lower and water, labor and pest control inputs are higher.

The solution proposed by California’s farm critics- that we look elsewhere for our food supply- would mean that millions of consumers have fewer selections, lower quality and higher prices for the kinds of healthy choices they want for their families.