returning to a time prior to Western development is unrealistic.

To describe the Delta as altered is to say that New York City is populous or California water politics contentious. Since the 19th century when locals began to reclaim the marshlands, dike the rivers, and develop settlements on the rivers- the history of the Delta has long been one of change. California’s largest river delta, the Sacramento – San Joaquin Delta has been forever altered by human habitation. Little remains of the complex estuary network of tidal wetlands, freshwater rivers and recurring saline incursions.

Long gone are the nuanced networks of sloughs and wetlands that once dominated the historic delta. Today’s Delta is a scene dominated by numerous dried islands often sitting 20-30 feet below the water level just beyond the 1100 miles of earthen dikes. Plans exist to restore more than 30,000 acres of riparian and wetland habitat, but to date these plans continue to undergo environmental review.

Beyond the edges of these islands ongoing dredging of channels for deepwater shipping to the inland port cities of Stockton and Sacramento applies greater pressure to the species looking for shallow water habitat.

The Delta today is one of artificially fresh water- held far to the west of pre-project development, flows originating in the state’s network of reservoirs now support in-delta diversions for use by in-delta agriculture, cities as near as Stockton and as far away as San Diego. It is used to grow avocados on small farms near San Diego and organic cantaloupee near Firebaugh, among more than 300 other types of food and fiber that rely on water flowing through the Delta. as well as providing water to more than 25 million Californians.

There are numerous stressors impacting the health of the Delta and the threatened and endangered species living there, including the Delta Smelt. The region’s biosphere has changed dramatically and is now dominated by invasive species that have decimated native fish populations.

The National Marine Fisheries Service has stated that predation by non-native bass on winter-run salmon is a “major stressor,” while widespread invasive Asian clams and other species continue to alter the delta’s complex food network. Industrial chemicals being found in species at the mouth of the bay are also tied to what has been called Pelagic organism decline by researchers studying the health of the Delta.

Regarding the decline of the Delta Smelt, the federal agency responsible for studying and restoring threatened species, the Fish and Wildlife Service, acknowledges that “we are unable to determine with certainty which threats or combinations of threats are directly responsible.” Since 1994, Fishery and wildlife regulators have limited their focus to delta exports, though the agency acknowledges that its “existing regulatory mechanisms have not proven adequate” to stop the fish’s decline since its listing nearly 20 years ago.

Yet sensational news stories continue, declaring water exports culpable- “With Just Six Delta Smelt Left, Controversial California Fish Species Faces Impending Extinction” and “Threatened Smelt Touches Off Battles in California’s Endless Water Wars” but scientists who study the complex Delta ecosystem suggest that this claim is likely overly simplistic. Researchers discussing the issue with the Wall Street Journal noted that “Other studies have noted that the biggest driver of species abundance in the delta is precipitation, which may explain why the smelt population has plummeted over the past four years of drought after rebounding in 2011—a wet year.” 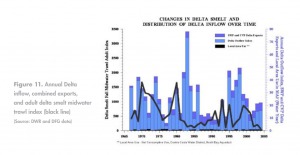 Suggested changes to the Delta export facilities, intended to reduce possible impacts to threatened and endangered species while restoring reliability to water supplies remain under review, and could allow the Delta to return to a more natural condition, while restoring water supply reliability to more than 25 million Californians and millions of acres of the most productive farmland on the planet.