The Department of Water Resources (DWR) and U.S. Bureau of Reclamation (USBR) in conjunction with the U.S. Fish and Wildlife Service (USFWS) are experimenting with pumping reductions for several days to prevent a “turbidity bridge” from occurring in the central and south Delta. Delta smelt are attracted to turbid, or cloudy, water because it provides shelter from potential predators, such as non-native bass. According to a statement today by DWR, “Foregoing the capture of tens of thousands of acre-feet of water over the next several days may allow water project operators to avoid the loss of hundreds of thousands of acre-feet of water supply later in the winter.”

In December 2012, a plume of turbidity that extended into the central Delta helped to create the situation in which water project operators severely curtailed pumping storm runoff in order to avoid harm to smelt. As a result, hundreds of thousands of acre-feet of water were not moved into reservoir storage.

Will the Risk Pay Off?

Clearly there is risk associated with a decision like this. We hope the risk pays off.

While this week’s big storm dropped significant amounts of rain and snow in California, many water users worry that we are on track to repeat the disaster of last year. Hundreds of thousands of acre-feet of water were in the system and Delta pumps were almost completely shut down. It surprises many that we are mismanaging floods in a drought. As it turned out, last year’s wasted water resulted in most South of Delta water users getting a zero allocation and the state suffering significant economic and social damage with no measurable environmental benefits.

As this really big storm brings its bounty of water we are situated just like we were 12 months ago except that now the State’s reservoirs and its groundwater are substantially more depleted than they were exactly one year ago.

Last week, the C.W. “Bill” Jones Pumping Plant at Tracy was running at a pathetic 19.7% of capacity. This week it is running at 60% capacity, or 2,600 cubic feet per second (cfs) out of a permitted level of 4,300 cfs. Delta outflows, in comparison, are six to over 30 times the permitted export level. 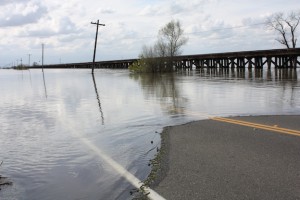 The possibility of Delta smelt will prevent additional pumping

Delta inflows are rising dramatically and with very high outflow, perhaps exceeding 100,000 cfs, a significant amount of water is available for export to put into storage for next year’s crop season. Many agencies will be in flood control management mode. Nonetheless, with the state in a historic drought, pumping is likely to be sharply curtailed due to the possibility that smelt are cloaked in the turbid water stirred up by storm flows. Except for a marginal theoretic benefit to Delta smelt, the entire southern half of the state would be able to access this precious resource, which instead will be turned to salt in the Pacific Ocean.

This is just the kind of Kafkaesque nightmare the Emergency Drought Legislation sought to relieve… at least around the margins.

Perhaps the crystal ball is wrong. If not, let’s hope this year we are better prepared to make the case that such behavior is blatantly contrary to the public interest.